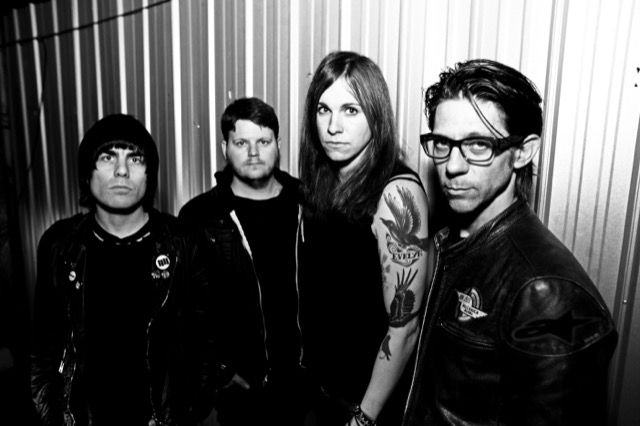 AGAINST ME!
US | Total Treble

To pirate the title of one of their early songs (and still a set-list staple), Against Me! is a band that laughs at danger and breaks all the rules.

Fronted by Laura Jane Grace, AM!’s much-anticipated, Transgender Dysphoria Blues released in January 2014. The title of their sixth album offers a direct nod to news that shocked fans and shook up the rock world when it was dropped—Grace is a transitioning transgender person who revealed her story in the May 12, 2012 issue of Rolling Stone (readers curious to learn more about the transition can check out Laura Jane’s “My First Year as a Woman” journal online in Cosmopolitan).

Against Me! began as an anarchist solo act in Gainesville, Florida in 1997. After transforming into a traditional four-piece a few years later with the crucial addition of guitarist James Bowman, they quickly became a driving force in the punk scene—despite facing an abundance of unsolicited danger.

While emerging unscathed from two separate road tour spinouts and, more recently, enduring a flying mic stand which cost Grace her front teeth, Against Me! have played in all 50 states and 29 countries, cranking out an average of 200 sweat-drenched, fist-pumping, shout-a-long live gigs per year over the past decade. Their musicruns the gamut from thrashing to anthemic to intimate, with Grace’s pointed lyrics and powerhouse voice blending vitriol and vulnerability like few other performers.